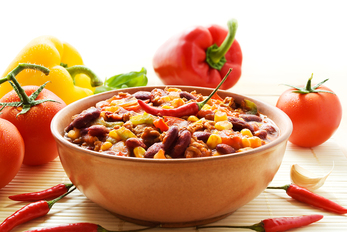 History of Chili
When it comes to the story of chili, tales and myths abound.

While many food historians agree that chili con carne is an American dish with Mexican roots, Mexicans are said to indignantly deny any association with the dish.

Enthusiasts of chili say one possible though far-fetched starting point comes from Sister Mary of Agreda, a Spanish nun in the early 1600s who never left her convent yet had out-of-body experiences in which her spirit was transported across the Atlantic to preach Christianity to the Indians. After one of the return trips, her spirit wrote down the first recipe for chili con carne: chili peppers, venison, onions, and tomatoes.

Another yarn goes that Canary Islanders who made their way to San Antonio as early as 1723, used local peppers and wild onions combined with various meats to create early chili combinations.

Most historians agree that the earliest written description of chili came from J.C. Clopper, who lived near Houston. While his description never mentions the word chili this is what he wrote of his visit to San Antonio in 1828:  "When they [poor families of San Antonio] have to lay for their meat in the market, a very little is made to suffice for the family; it is generally cut into a kind of hash with nearly as many peppers as there are pieces of meat--this is all stewed together.”
In the 1880s, a market in San Antonio started setting up chili stands from which chili or bowls o'red, as it was called, were sold by women who were called "chili queens." A bowl o'red cost diners such as writer O. Henry and democratic presidential hopeful William Jennings Bryan ten cents and included bread and a glass of water. The fame of chili con carne began to spread and the dish soon became a major tourist attraction. It was featured at the World's Fair in Chicago in 1893 at the San Antonio Chili Stand.

By the 20th century chili joints had made their debut in Texas and became familiar all over the west by the roaring ‘20s. In fact, by the end of that decade, there was hardly a town that didn't have a chili parlour, which were often no more than a shed or a room with a counter and some stools. It’s been said that chili joints meant the difference between starvation and staying alive during the Great Depression since chili was cheap and crackers were free.

​Chili & The President
U.S. President Lyndon B. Johnson was a big chili lover. His favorite recipe became known as Pedernales River chili after the location of his Texas ranch. Johnson preferred venison, which is leaner to beef, probably due to doctor’s orders about his bad heart. Lady Bird Johnson, the First lady, had the recipe printed on cards to be mailed out because of the many thousands of requests the White House received for it.

"Chili concocted outside of Texas is usually a weak, apologetic imitation of the real thing,” Johnson is quoted as saying. “One of the first things I do when I get home to Texas is to have a bowl of red. There is simply nothing better.”

"365 Days - Thousands of Excuses"
Marks and logos referenced herein belong to their respective companies. © 2021
Contact us at: info@PartyExcuses.com